At the beginning of 2020, the EU kicked off the international CoroPrevention research project, which concentrates on the prevention of heart diseases. The Onnikka weight management app developed at the University of Oulu plays an important role in the project.

The CoroPrevention project is targeted at people suffering from coronary heart disease. Markku Savolainen, Professor of Internal Medicine (emeritus) at the University of Oulu, distinguishes two themes in relation to the project.

“The project aims to identify the coronary heart disease patients at a high risk of myocardial infarction. The risk markers are ceramides or, in other words, fats presenting abnormal incidence and structure in people with a high risk of cardiovascular diseases.”

The Finnish Hertta ceramide test developed by Tampere University Professor Reijo Laaksonen’s research group and Zora Biosciences Oy is used to identify at-risk patients. The other theme of CoroPrevention, the treatment of at-risk patients and the prevention of myocardial infarctions, involves the utilisation of an innovation developed by the University of Oulu.

The programs will be linked together over the course of 2020, provided that the coronavirus epidemic does not upset the schedule. The end result will be a new kind of mobile app that facilitates lifestyle changes and involves elements of Onnikka. The efficacy of the app will be revealed by the four-year clinical study set to commence at the beginning of 2021. The study to be conducted by multiple facilities, such as the Oulu University Hospital, will monitor a total of 12,000 cardiac patients from six different EU countries.

“One aspect is finding at-risk patients, while another is treating them with the joint program developed by experts from Oulu and Belgium,” Savolainen says.

The aim is to create a new kind of preventive treatment path that emphasises lifestyle changes and will be included in European clinical practice guidelines for chronic diseases. 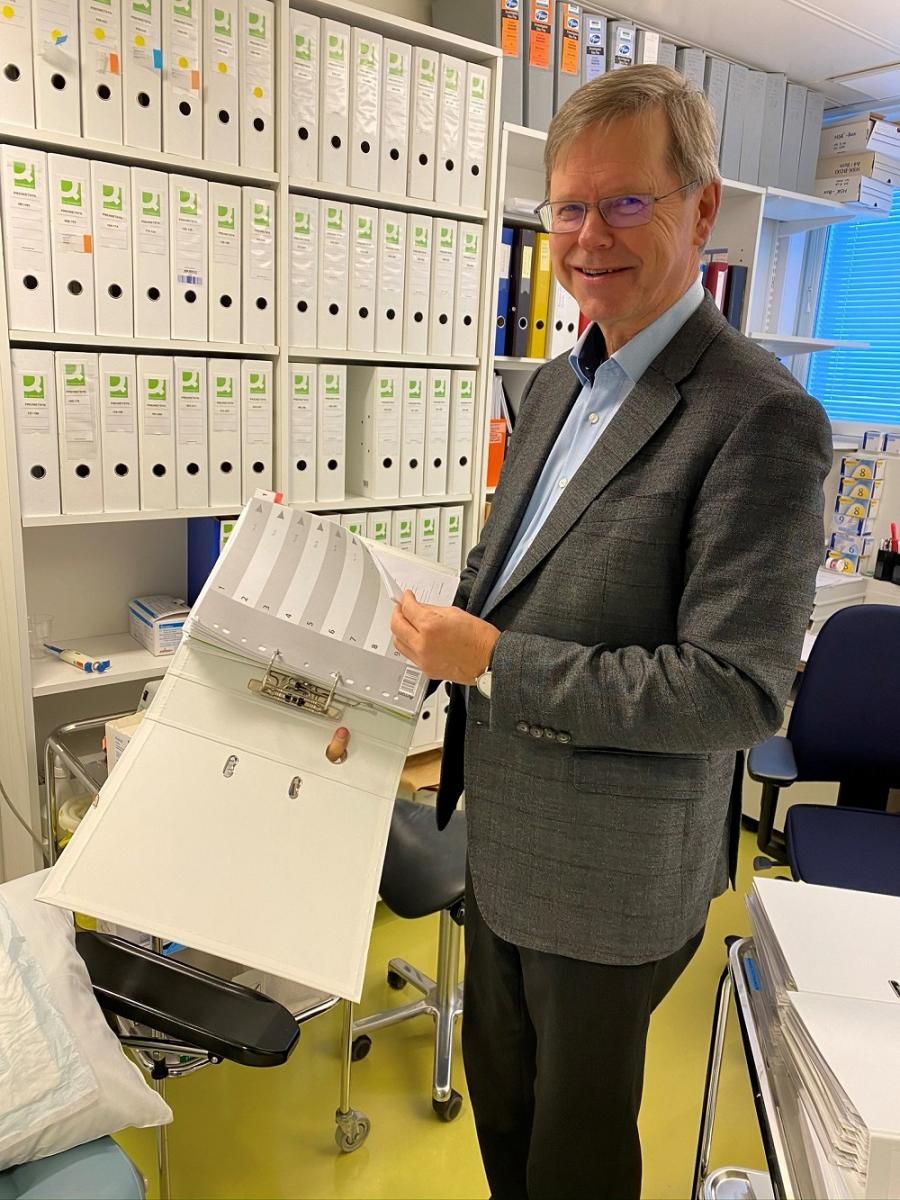 Photo: Scientific evidence is one of the Onnikka application’s absolute strengths. Professor Markku Savolainen showing the archives of Onnikka-research along the years.

Both the Hasselt University guidance program and Onnikka are web-based applications. The former is a more traditional expert-driven and exercise-focused program that provides a variety of guidelines, while Onnikka is striving for a new kind of user-oriented approach.

“This is the key element of Onnikka that separates it from the thousands of other coaching apps currently available,” says Professor Harri Oinas-Kukkonen, the other main developer of the application alongside Savolainen.

“The idea is to support behaviour change among the users. The Persuasive Systems Design method developed at the University of Oulu was set as the starting point and in the core of the design process. It aims to determine app features that will help users reach the intended goals. These features include monitoring personal behaviour, virtual exercise, encouraging feedback, reminders and leveraging peer influence.”

The PSD model introduced some ten years ago has never been utilised as systematically as this. The model is based on information systems science, social and cognitive psychology and close cooperation with Stanford University.

“The basic idea is to turn software design on its head: the process is based especially on the users’ behavior change-related goals instead of technical or other user-related questions,” says Oinas-Kukkonen.

The model is divided into four “baskets”. The first of them, supporting the primary goal, includes indicating causal relationships, limiting excessive options, and monitoring exercise sessions and user activities. The second basket, the dialogue between the information system and user, consists of encouraging feedback, reminders and rewards, for example. The third basket, credibility, is formed by the expert-driven content, truthfulness and communications hinging on credibility. In the final basket, social influence, group impacts are added into the mix: observations of others, comparison and normative messages.

“The model can also be applied to other areas such as striving for a greener lifestyle,” Oinas-Kukkonen says. 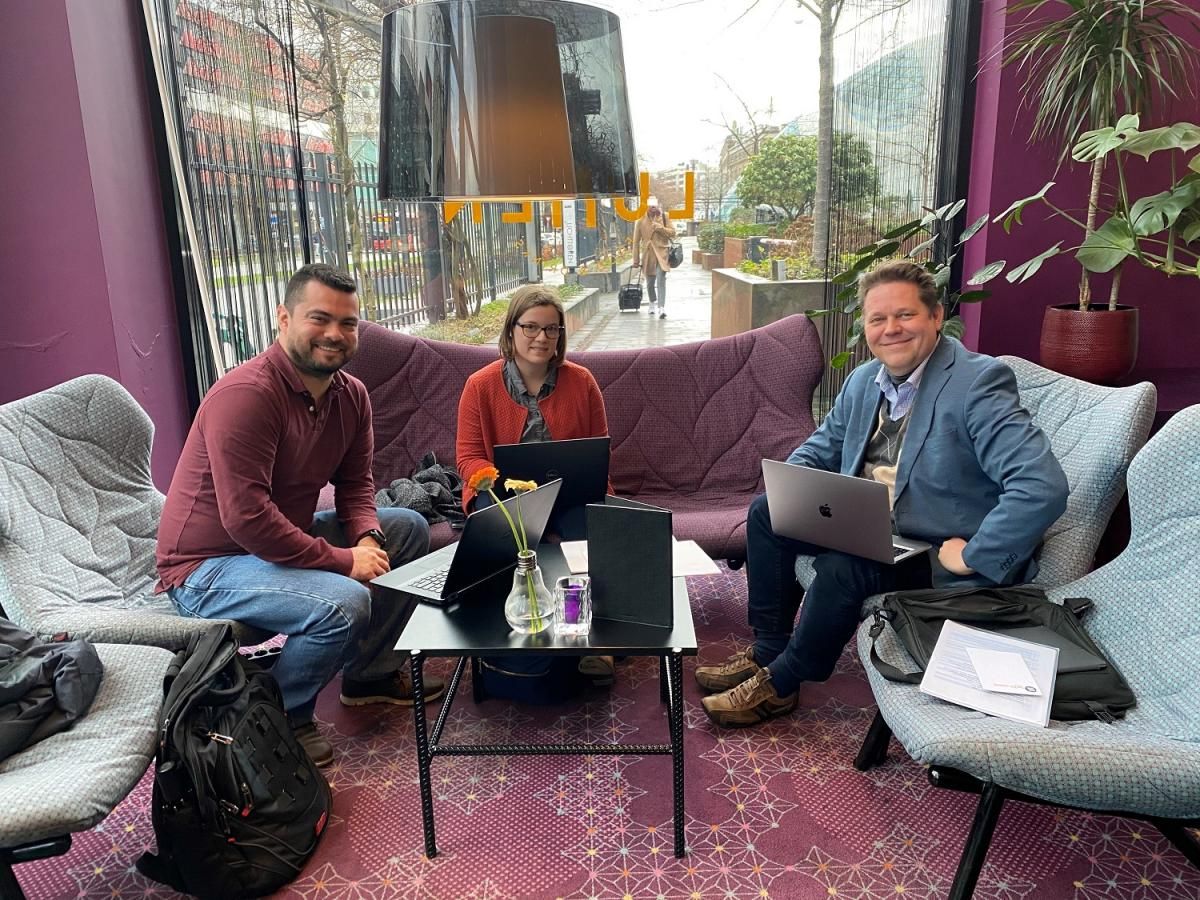 Photo: Professor Harri Oinas-Kukkonen (on the right) with the researchers from Hasselt University, Gustavo Rovelo Ruiz and Cindel Bonneux, attending the software development meeting in Eindhoven, Holland in February 2020.

Oinas-Kukkonen and Savolainen began their collaboration soon after the introduction of the PSD model. In addition to the fields of computer science and medicine, which these two men represent, Onnikka has its roots in information science.

In accordance with the PSD model, Onnikka has not been crammed full of information. “There is a lot more to influencing change than just pushing information down everyone’s throats,” Oinas-Kukkonen says.

“Only about four per cent of the content pertains to weight reduction. The program also addresses eating behaviour, exercise, life situation, and change and motivation in more general.”

The aim is to offer up the content in an appropriately bite-sized format: True to its name, Onnikka (a Finnish and especially Oulu-based colloquial word for ‘bus’) is divided into stops spread across the 52-week coaching period.

“The weekly time requirement is very small. The basic formula includes a small amount of carefully-considered information – on the calorie counts of sugary snacks, for example – and an exercise aimed at encouraging users to reflect on their own behaviour.”

As an example, the application can ask users to identify the craving to buy treats, consider the reasons for it but then just let it be. “The goal is to root everything in one’s own day-to-day activities and provide down-to-earth advice. Users can also present questions to the experts,” Oinas-Kukkonen says.

“In contrast to other similar apps, there is no need for users to save a large volume of information on their activities. You can save weight information, for example, if you want to, but this is not essential.”

Permanence is an important health factor in terms of weight loss

Research results indicate that Onnikka is effective. In a study carried out by the University of Oulu, 532 overweight individuals between 20 and 60 years of age were divided into three groups that were provided with small group guidance by a nutritionist, brief motivational guidance based on Current Care Guidelines, or a one-time information package similar to those offered by health centres. These groups were then further divided into two groups, one of which used Onnikka while the other did not. The weight loss achieved in the groups that used Onnikka was far more substantial.

“All Onnikka users fared significantly better, and those who used it to a sufficient degree dropped the most weight,” Savolainen says. “User monitoring and activation measures are needed because some logged in to the app rarely or not at all.”

“The most important thing to note is that, at the two-year mark, the lost weight had stayed off even without Onnikka guidance after the first year. Preliminary results suggest that the weight loss persists partially even at five years.”
The other extreme was the one-time health centre information package, which led to no more than a few hundred grams of weight loss which was found to been nullified two years down the road. However, using Onnikka increased the result to about 2 kg. “At the two-year mark it was as high as 2.5 kilos. This may not sound like much, but it is medically significant.”

In fact, the latest Current Clinical Guidelines and the recent review of the European Association of Preventive Cardiology organisations refer only to Onnikka as an example of a web-based weight management method. Scientific evidence is one of the application’s absolute strengths. The CoroPrevention project will involve elements of the solution being incorporated into a new application bound for testing.

“It is difficult to say how easy it will eventually be to discern which of the applications has more impact based on the results,” Savolainen points out.

The University of Oulu and the Oulu University Hospital will also initiate a study relating to Onnikka at the health centres of Muhos, Kempele, Liminka and Ii.

“We will be testing a slightly updated version of Onnikka among 200 patients at risk of cardiovascular diseases. They do not yet suffer from actual coronary heart disease, which differentiates the test group from that of the CoroPrevention project.”